"I am patient with stupidity but not with those who are proud of it."  - Edith Sitwell


One of my friends went on her first date ever today, so I was trying to give her advice, and since you should be in awe of my vast and varied (read: extremely limited) dating experience, I will share that wisdom with you.


5 Rules for First Dates, According to ElfArmyWrites


Seems like a no-brainer, but it's pretty important when you think about it.


It will be awkward.


3. Make sure the movie you intend to see actually exists.


Deciding to see a movie at 6:30 and then a week later seeing that there aren't actually any showings of that movie at any theaters in your entire city at 6:30 or- even anywhere near 6:30 for that matter- can be a bit of a problem.


That would be bad. Coming very close to hitting a deer is also bad. And, at least here in North Carolina, there are a lot of them.


This is somewhat significant when planning the Second Date.


Thus ends the advice portion of our show. This segment is unlikely to return until such time when I have really hilarious things to add.
Posted by elfarmy17 at 7:09 PM 2 comments:

"You don't mess with a lion. The lion is the king of the jungle. The lion will destroy you." - Part of my analysis of The Old Man and the Sea. This is deep, AP-level stuff, guys.

Today I received an email from Figment. Attached was a permission form for something I'd written and posted on their site to be included in an anthology.

I went back to reread it/figure out what I'd actually said and decided I really don't like some of the phrasing. But hey. Gaiman's Law dictates I'm going to be annoyed with something no matter what.

But still--published in an ebook being sold for charity. I an okay with this.

Also, can we appreciate my writing group and our collaborative story involving Rick Santorum taking over the world and being stopped by an army of hipsters.
Posted by elfarmy17 at 9:58 PM 5 comments:

"This is my favorite book in all the world, though I have never read it." - William Goldman


My face is pretty sunburned right now. Why? Because I was at a debate tournament all weekend.
Yes. Really.


They were running it with double-elimination, so as soon as you lost two rounds, you were out. I lost Round 1 due to Hitler (65 years dead and still doing damage, that man), won Round 2 against one of the top varsity debaters the local elite private school has (YES), and then lost the first round of the day on Saturday due to the judge being far beyond competent.


Which means I spent most of the day lying on the grass with my friends- playing frisbee, looking for cloud shapes, watching (and quoting every line of) The Princess Bride, and stalking our debate idols. Which means it was pretty much the best day ever.


I didn't expect to do well (I'm usually in Novice, and these were all the top 4 varsity people from each team- we just have one varsity guy so I got to go anyway), so that was fine, and I learned loads from the few rounds I did have.


Our duo interpretation team is going to Nationals, and one of my fellow Novice debaters is one of the alternates in our event--which is just mind-blowingly amazing. (Since she was on Neg in finals, and Aff won, does that mean it's morally permissible for us to target and kill her opponent so that she can go?)


The State Championships are next month, they have a Novice category, and the topic is the same. We are going to own that thing.
Posted by elfarmy17 at 2:20 PM 2 comments:

"Sin is not genetic. Sin is a made up concept and I dare you to show me one shred of evidence of sin in my genetic code…You are saying that an entire group of people are sinful and amoral and unnatural. You want to talk the talk, you better have the fucking evidence to back it up or else it is nothing more than unadulterated bigotry." - a friend of mine


When my best friend and I were in 4th grade, our school changed their policy so that every kid who rode a given bus had to go to a specific room after school, instead of just waiting in their classroom for the bus to be called. We weren't in the same class at the time, so this was pretty great.


We spent the hour or so until our bus arrived making "flash cards" - slips of paper with little phrases on them, which we would read over every now and then. Things like "llamas are cool," or "[boy we knew's name] is dumb." Quotes from movies we thought were funny. That sort of thing.


Today the kids at the writing club we volunteer at were being pretty productive on their own, so we grabbed some crayons and started coloring, which eventually lead to a new set of flash cards.


Some of the cards were the same, for nostalgia's sake (and because we still know a certain boy, and he's still pretty dumb). Others praised the awesomeness of a few of our friends, ranted about corporate hypocrisy and more current male targets of frustration, and quoted from Dr. Horrible's Sing-Along Blog. Plus, the obviously necessary, "The kids probably think we're weird."


All in crayon, I might add.
I fully intend to keep these forever.
Posted by elfarmy17 at 8:00 PM 2 comments:

Not Citizens, Not Legal--Still People

"...after working with these men and women, picking beans, packing corn, for hours on end, side by side in the unforgiving sun, I have to say and I do mean this sincerely, please don't make me do this again. It is really, really hard. For one thing...when you're picking beans you have to spend all day bending over. It turns out, and I did not know this, most soil is at ground level. If we can put a man on the moon, why can't we make the Earth waist-high? Come on, where's the funding?" - Stephen Colbert

“Not Citizens, Not Legal-- Still People”

They are savages bent on taking over the American Southwest for the creation of a new country called Aztlan, their sole purpose here is to engage in “competitive breeding” to decrease “white power,” and a movement to protect the civil rights of white Americans needs to begin as soon as possible--or at least this is what the leading anti-immigration hate groups say (“Anti-Immigration Groups”). While the radical propaganda spread by the National Organization for European American Rights and other extremist groups can easily be written off as ignorant, racist fear-mongering, there is still much controversy today about the large population of illegal immigrants--estimated to be around 12 million (Ewing)-- currently living in the United States. Whatever else is done regarding the issue, the evidence clearly shows that the population of illegal immigrants currently residing in the United States of American should not be deported en masse.

The Chronicles of Harris Burdick

"I am, indeed, a king, because I know how to rule myself." - Pietro Aretino


I got home today and was idly thinking about how I hadn't posted anything in more than a week, and was trying to think of interesting things to write about...and then my mom got the mail and there was a package for me. It contained a signed galley copy of The Chronicles of Harris Burdick-- 14 short stories based off of images from Chris Van Allsburg's The Mysteries of Harris Burdick. 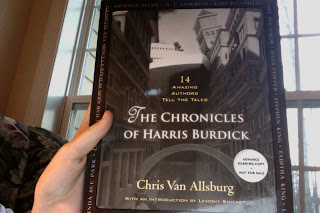 I had entered a contest on Novel Novice back in November to choose one of five pictures and write a 250-500 word short story about it. Mine (here on Figment) had the thoroughly unoriginal title of "Mr. Linden's Library" (the title of the picture itself), but was apparently one of the five winners.


The funny thing is, I also submitted it to my fellow staff members of my school's literary magazine, and they hadn't actually been crazy about it.


This gives me hope for the story I submitted to Tor.com around the same time, although judging by their estimated response times I don't expect to hear back from them until around when I hit college. They do have way more submissions, but they're also not limited to just five "winners"...
I guess we'll see. Although as of February 22nd, they still have submissions from before September 2010, so we'll see a long time from now.